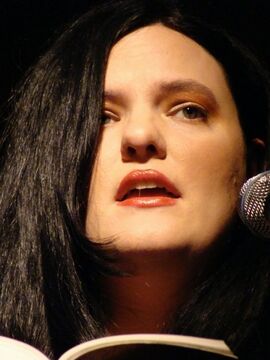 Catherynne M. Valente is the author of the Orphan's Tales novels. She is is a Tiptree–, Andre Norton–, and Mythopoeic Award–winning novelist, poet, and literary critic. Her short fiction has appeared in Clarkesworld Magazine, the World Fantasy Award–winning anthologies Salon Fantastique and Paper Cities, along with numerous Year's Best volumes. Her critical work has appeared in the International Journal of the Humanities under the name Bethany L. Thomas as well as in the essay anthology Chicks Dig Time Lords. She keeps a blog at [8] and currently lives on Peaks Island in the state of Maine with her husband. Valente has also published five books of poetry and won the Rhysling Award for speculative poetry.

Her debut novel, The Labyrinth, was a Locus Recommended Book, and her subsequent novels have been nominated for the Hugo, World Fantasy, and Locus awards. Her 2009 book, Palimpsest, won the Lambda Award for GLBT Science Fiction or Fantasy. Her two-volume series The Orphan's Tales won the 2008 Mythopoeic Award, and its first volume, The Orphan's Tales: In the Night Garden won the 2006 James Tiptree, Jr. Award, was nominated for the 2007 World Fantasy Award, and was The Plain Dealer's #1 summer reading novel in 2007.

In 2009, she donated her archive to the [9] Science Fiction and Fantasy Writers of America (SFWA) Collection] in the department of Rare Books and Special Collections at Northern Illinois University.[1]

Retrieved from "https://orphanstales.fandom.com/wiki/Catherynne_M._Valente?oldid=3354"
Community content is available under CC-BY-SA unless otherwise noted.